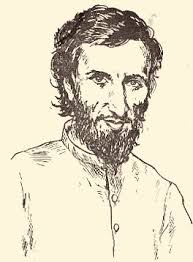 Fr. Joannes Ernestus Hanxleden S.J., popularly known as Arnos Padiri was a German Jesuit missionary. He was born at Ostercappeln near Osnabrueck in the north-west of Germany in 1681. After doing philosophical studies in his home town, Osnabruck, Hanxleden volunteered for service as a missionary in Kerala. He came to Kerala in 1701. After completing his spiritual formation (Novitiate) in Goa and priestly studies in Ambazhakad (Sampaloor) Jesuit Seminary, he was ordained priest in 1706. Having mastered Malayalam and Sanskrit and served the Archbishop of Cranganore as secretary, Hanxleden moved to Velur, a small village near Thrissur in 1712 and built St. Francis Xavier’s church and his residence (Arnos Bhavan) there. This was his abode for most of his remaining life. He wrote most of his literary works from here and became a Malayalam/Sanskrit poet, grammarian, lexicographer and philologist. He died on March 20, 1732, at Pazhuvil near Thrissur and was buried there in the church. Arnos Bhavan and the church at Velur are preserved as historical monuments by the Archeological Department of Kerala.